Biograd na Moru is a small town of great and rich history, a tourist and nautical town. It is settled in the Zadar area and it is surrounded by wonderful nature, national parks, nature parks, and clean, beautiful sea.

In the 11th century, Biograd was the capital of medieval Croatian kings and bishops. Although Biograd survived the Venetian sacking in the 12th century, there is still plentiful evidence of an eventful and rich medieval history. Above all things, the Christian religious buildings stand out: The parish church of St. Anastasia (1761), the early Romanesque church St. Ante (13th century), the church of St. Rok (16th century) and the basilica of St. John (11th century ), which is the only one to survive the Venetian sacking. The history of the city can be studied in the Heritage Museum.

Material evidence of an eventful and rich past of the Biograd area are stored in the extremely interesting Heritage Museum. 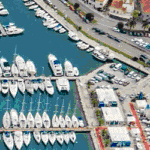 Biograd is also home to the largest boating show in Croatia – the Biograd Boat Show with over 15,000 visitors and 300 exhibited sea craft. Every day of the show, the sunset marks the end of the exhibit and the beginning of the evening programme which continues in the centre of the town near the marina, offering top-notch food and entertainment up until the late hours. The Biograd Boat Show is held in October, and you can find more information on the BBS website.

The Biograd Night is an especially attractive and entertaining programme which gathers more than 20,000 people on the city seafront every year in October. A musical laser programme, pyromusical fireworks, a parade of illuminated boats, preparation of specialities outdoors, folklore group performances, klapa performances, city music, majorettes, entertainment groups – all this simply must be experienced.